The event, which featured an awards program and conversation between the honoree and Gala Chair Ken Burns on the 150th anniversary of the Gettysburg Address, was sponsored by AT&T, with the generous support of the Maris S. Cuneo Foundation, Governor Jim Blanchard and Janet Blanchard, and Marvin F. Weissberg.

The Records of Achievement Award is a tribute to an individual whose work has cultivated a broader national awareness of the history and identity of the United States through the use of original records, including those preserved by the National Archives. Foundation Chair A’Lelia Bundles, Executive Director Patrick M. Madden, and Burns joined Archivist of the United States David S. Ferriero in presenting the award. 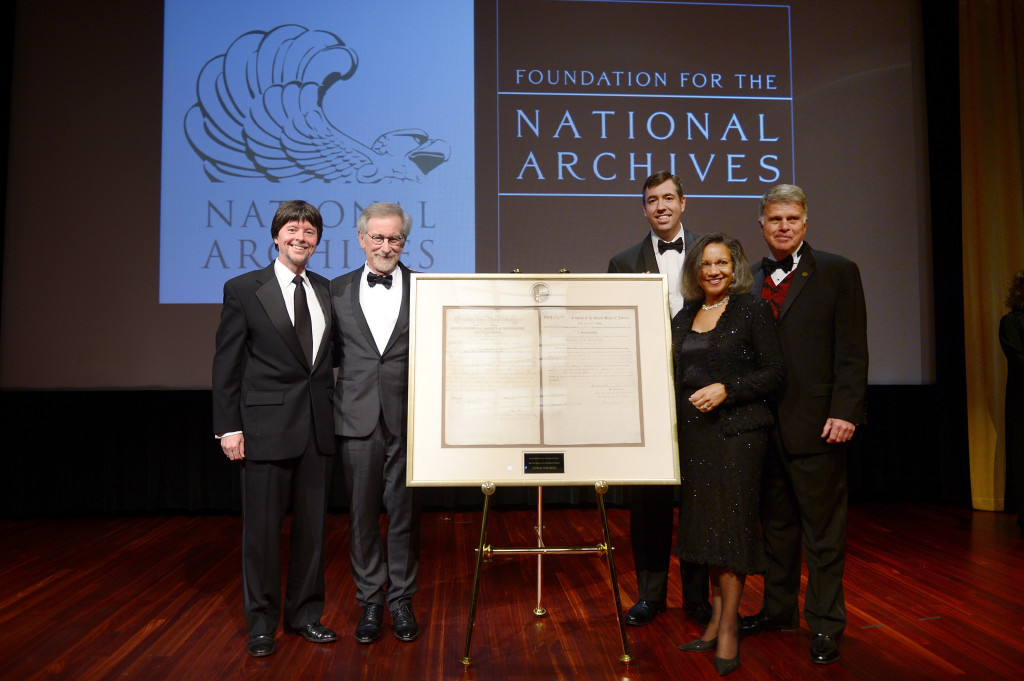 “We are pleased to recognize Steven Spielberg with the Foundation’s highest honor – the Records of Achievement Award – not just for his groundbreaking filmmaking, but for his passion for American history and his fidelity to the original historical documents that are housed here at the National Archives,” said Bundles.

Welcoming Spielberg and about 250 guests to the Archives’ William G. McGowan Theater, Ferriero thanked the filmmaker for acknowledging the National Archives staff in the credits to last year’s blockbuster Lincoln.

The Foundation recognized Spielberg, a three-time Academy Award® winner, for his contributions as a director of Lincoln and other historical films including Saving Private Ryan, Amistad, The Color Purple, and Schindler’s List. He also was honored for his work in establishing what has become the USC Shoah Foundation Institute for Visual History and Education, which has created the world’s largest video archive on a single topic: life histories of survivors of the Holocaust and other genocides.

“I am deeply honored,” Spielberg said, “to have been selected to receive this great recognition from the institution that preserves American history, which is a subject near and dear to my heart.”

The award itself included two facsimiles of records from the National Archives often referred to as “the two 13th Amendments.” The first is a little-known resolution, passed in 1861 but never ratified, which would have enshrined the institution of slavery in the Constitution of the United States. The second, signed by President Lincoln just four years later in 1865, abolished slavery forever.

Spielberg and his research team consulted these and other National Archives records to inform their work in Lincoln. During a private tour of the Archives Tuesday evening, Archives staff showed Spielberg the official 13th Amendment with Lincoln’s signature as well as Rep. Thaddeus Stevens’ 1861 handwritten joint resolution urging the abolition of slavery. Spielberg held the Stevens resolution, encased in a protective sleeve, and read it aloud. 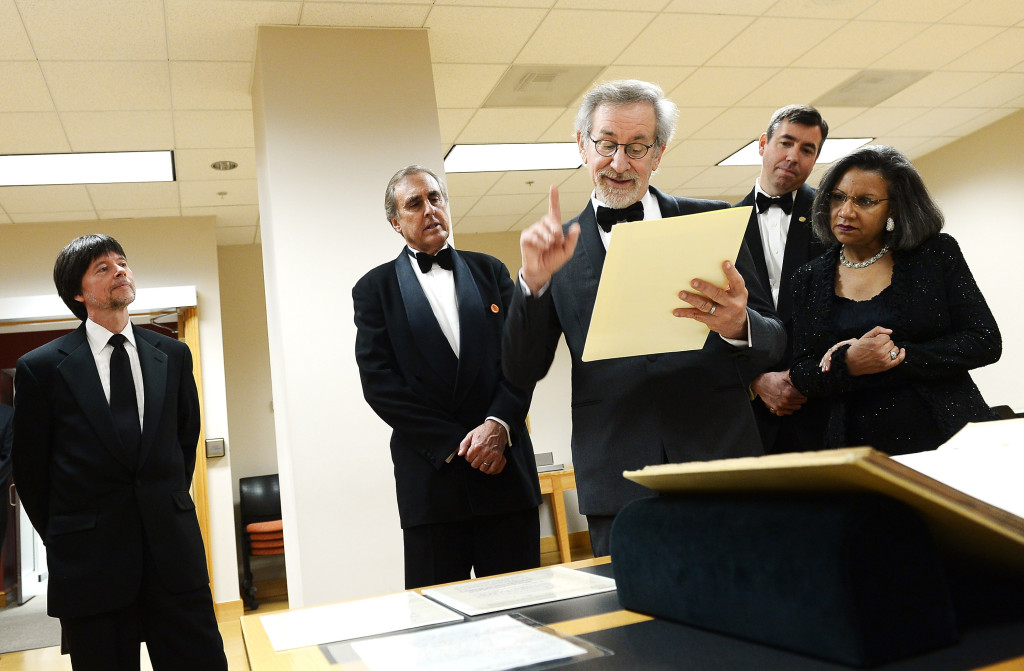 During the awards ceremony, Burns engaged Spielberg in a 30-minute discussion on his film legacy. His questions included some gathered from the public through an #askspielberg social media campaign launched by Burns and the Foundation in the weeks leading up to the Gala.

Over the weekend before the award ceremony, the public also was invited to join the tribute to Spielberg by attending a Steven Spielberg Film Festival at the National Archives, which teamed up with DreamWorks Studios to offer free screenings of Saving Private Ryan, E.T. the Extra-Terrestrial, Amistad, and Lincoln. The Archives showcased several records related to the film topics on screen before each movie. 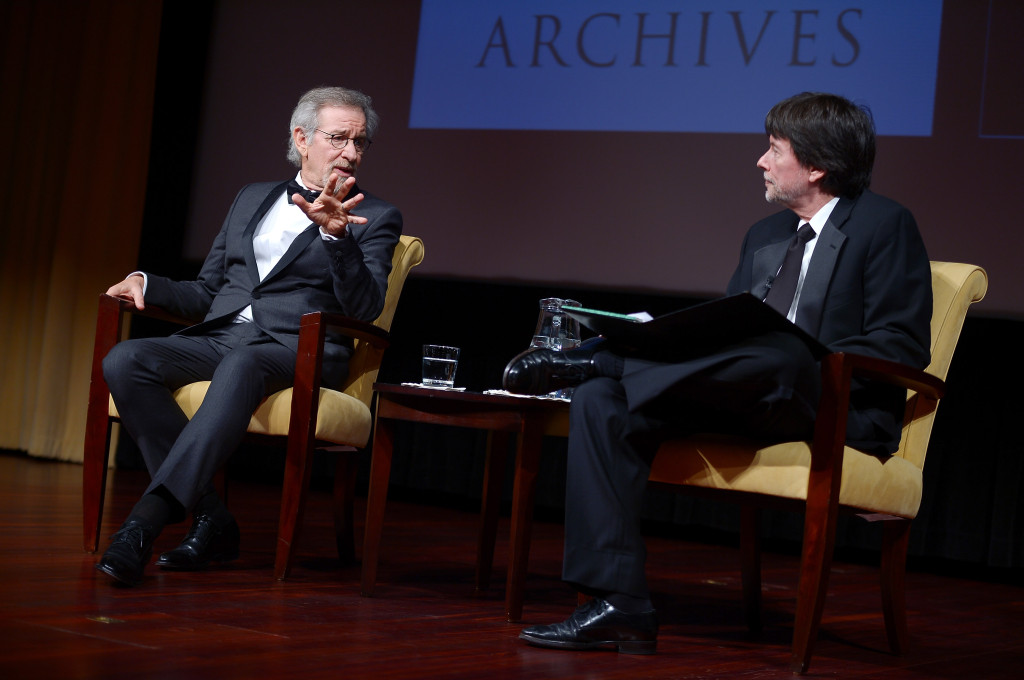 The Gala ceremony also included a tribute film in which such notables as Whoopi Goldberg, George Lucas, and Kathleen Kennedy discussed Spielberg’s devotion to historical accuracy in his work. The tribute ended with a congratulatory message from one of Spielberg’s biggest fans, President Bill Clinton.

Attending the event were Tom Wheeler, a former Foundation Board President who is now Chairman of the Federal Communications Commission; U.S. Sen. Patrick Leahy; and former Sen. Charles Robb and his wife Lynda Robb. House Minority Leader Nancy Pelosi and her husband Paul also attended, as did several other members of Congress.

Other notable guests included Dwight Bush, Ambassador-Designate to the Kingdom of Morocco, and Stephen D. Smith of the USC Shoah Foundation. Foundation for the National Archives Board members Fay Hartog Levin, former U.S. Ambassador to the Kingdom of the Netherlands; and journalist Cokie Roberts and her husband Steve Roberts also attended.

The awards program was followed by a seated dinner in the Rotunda Galleries, the home of the original Declaration of Independence, the U.S. Constitution, and the Bill of Rights, and the evening ended with a champagne toast outdoors on the National Archives’ portico overlooking the National Mall.