The Rotunda for the Charters of Freedom, located on the upper level of the National Archives Museum, is the permanent home of the original Declaration of Independence, Constitution of the United States, and Bill of Rights.

Designed by architect John Russell Pope as a shrine to American democracy, the ornate Rotunda with its soaring domed ceiling also features two murals by Barry Faulkner, depicting fictional scenes of the “presentations” of the Declaration of Independence and the Constitution.

Flanking the documents themselves are additional records from the National Archives, exploring the making of the charters and their influences, as well as their impact throughout history. The Rotunda was renovated in 2003 to ensure the safekeeping of these records for generations to come. Visitors to the Rotunda will notice the cool temperature and the low lighting, which are designed to reduce the devastating effects of heat and light on the precious records. The Charters are displayed in specially designed encasements with aluminum and titanium frames, and the documents are surrounded by an inert gas. A cross-section of these cases can be seen in the “Public Vaults,” along with a special documentary about the re-encasement process.

Learn more about the Charters by downloading the free brochure (PDF) available for all visitors to the Rotunda, or check out the infographic below (also available as PDF), by curator Alice Kamps: 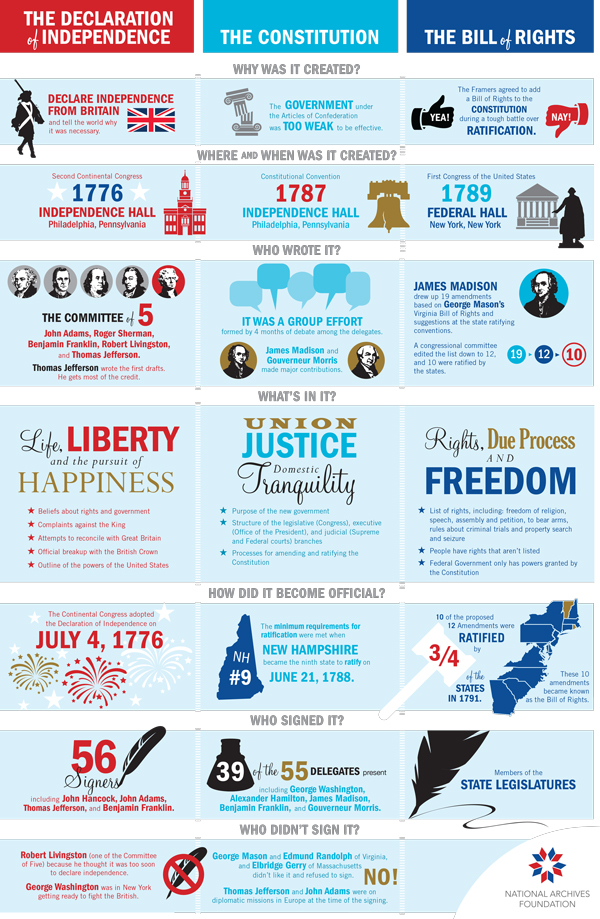 This brochure is made possible by the National Archives Foundation with the generous support of the Weissberg Foundation.