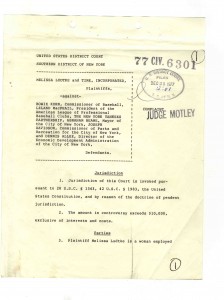 The Court determined that the policy violated Ludtke’s fundamental right to pursue a career under the equal protection and due process clauses guaranteed by the Fourteenth Amendment.

This document is being featured in conjunction with the National Archives’ National Conversation on Women’s Rights and Gender Equality.

The “National Conversation on Rights and Justice” is presented in part by AT&T, Ford Foundation, Seedlings Foundation, Carnegie Corporation of New York, and the National Archives Foundation.

Special thanks to Perkins Coie for their support in this event in New York City.