The Maker of Pilots: Willa B. Brown

Willa B. Brown, February 13, 1943
National Archives, Records of the Office of War Information

Aviator Willa Beatrice Brown (1906–92) achieved numerous “firsts” in her lifetime, many of them earned through her tireless advocacy to integrate aviation programs. Brown began taking flying lessons in 1934, and over the next four years, she earned an MBA at Northwestern University, her Master Mechanic Certificate, and her pilot’s license, making her the first Black woman to receive a license in the United States. Determined to give aspiring pilots opportunities, she and her husband opened the Coffey School of Aeronautics to train both men and women.

A leader and promoter of the Chicago community of Black aviators, Brown, 33 years old when World War II began, seized the opportunity when Congress funded the Civil Aeronautics Authority (CAA) to begin 220 pilot training programs. Authorized as a CAA school in January 1940, Coffey was one of 11 sites for Black men to train as pilots and mechanics for the Air Force program at Tuskegee. Brown achieved another first in 1942 as the first African American woman to receive a commission as a lieutenant in the Civil Air Patrol.

After Brown and her husband closed their school, she remained politically active. Her fight for equality in the air was realized when President Harry Truman signed Executive Order 9981 on July 26, 1948, which ended the segregation of the Armed Forces. Brown continued teaching aeronautics and business subjects in high school until she retired in 1971. In 1972 Brown was the first African American appointed to the Federal Aviation Administration’s Women’s Advisory Board.

Click here to learn more about Willa Brown and her accomplishments! 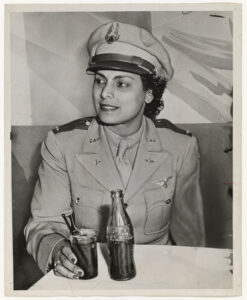