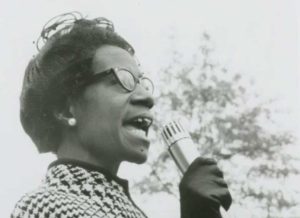 Shirley Chisholm became the first African American woman to serve in Congress when she took office in January of 1969. During her seven Congressional terms, “Fighting Shirley” was an outspoken champion for racial and gender equality, and economic justice. To mark the 50th anniversary of Chisholm’s historic entry into the U.S. House of Representatives, her oath of office and a record from her service on the House Rules Committee will be displayed.

On display in the East Rotunda Gallery through April 9, 2019.  Made possible in part by the National Archives Foundation through the generous support of The Boeing Company.