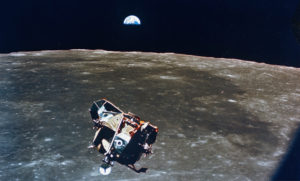 Visit the National Archives to see exclusive, featured documents from the Apollo 11 mission to the moon. From transcripts to flight plans, the museum will highlight some of the most important pieces of the monumental occasion. Documents will be on display through August 7, 2019 in the Rotunda Galleries.

Apollo 11 Flight Profile: Apollo 11 launched from Cape Kennedy, Florida, on July 16, 1969. For the next eight days the world closely tracked the mission’s progress as the crew flew to the Moon and back to Earth. This flight profile details the flight plan for the entire mission.

Apollo 11 Flight Plan: This flight plan for hour 102 of the Apollo 11 mission gives a timeline of tasks to be performed by the crew—Mike Collins (CMP), Neil Armstrong (CDR), and Buzz Aldrin (LMP)—and Mission Control in Houston (MCC-H). While Collins orbited the Moon in the Command Service Module (CSM) Columbia, Armstrong and Aldrin descended to the Moon’s surface in the Lunar Module (LM) Eagle. According to the plan, touchdown was expected at 102:47:11, but Armstrong’s voice crackled over the radio “the Eagle has landed” a minute and a half ahead of schedule.

Apollo 11 Flight Radio Transcript: Astronaut Neil Armstrong uttered the historic phrase “one small step for a man, one giant leap for mankind” as he took his first steps onto the Moon’s surface on July 20, 1969. This transcript of the Apollo 11 radio transmission to Mission Control documents the astronaut’s first impressions of the lunar surface but failed to capture Armstrong’s exact words. Whether the “a” before “man” in Armstrong’s statement was dropped due to an interruption in the transmission or because he misspoke remains a matter of debate.

Data Card for the Lunar Module: This “DATA CARD KIT” is a checklist of the EVA (extra vehicular activities) to be conducted by Neil Armstrong and Buzz Aldrin during their moon walk, including taking photographs, inspecting equipment, and collecting samples from the lunar surface. The Velcro squares on the card enabled the astronauts to attach the checklist to Velcro patches on their spacesuits and inside the Lunar Module.