The pursuit of freedom, justice and democracy has been the heartbeat of our nation since its founding. Join us as we explore our shared identity through tales of individuals and events from our past. Here you’ll find all the content you may have missed from past weeks – or the content you want to see again!

Freedom Is Not Free 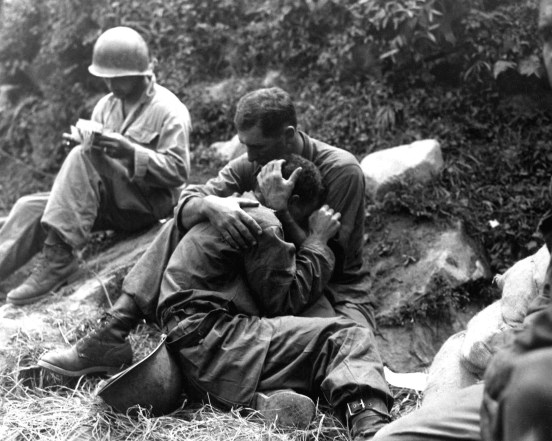 At the Korean War Memorial in Washington, D.C. there is a mural wall with a critical reminder written in ten-inch silver letters: FREEDOM IS NOT FREE.

There is perhaps no more sobering depiction of the human cost of war than this photograph from the National Archives holdings of a grief-stricken American infantryman whose friend had just been killed in action. In the Haktong-ni area, Korea, another soldier comforts the infantrymen, while in the background, a corpsman methodically fills out casualty tags.

Discover how the work of the Archives in St. Louis has helped identify missing soldiers from the Korean War and send them home for burial.

The Story behind the Vietnam Veterans Memorial

Visit the two-acre granite wall inscribed with 58,195 names in Washington, D.C., and you’ll see everything from flowers, family members tracing engraved names on parchment paper, and perhaps on very rare occasions, even a motorcycle. The Vietnam Veterans Memorial was designed as a symbol of America’s recognition of the men and women who served and sacrificed their lives in the Vietnam War. Learn about the story behind the wall with an online exhibit from the Ronald Reagan Presidential Library.

Poetry from the Front Lines

Walt Whitman is known as one of the greatest writers of the 19th century. But in addition to his poetry, he also used his pen in a lesser-known but important way. During the Civil War, he visited thousands of soldiers at the military hospitals, providing company, morale boosts and, most importantly, a helping hand to soldiers writing letters to their loved ones. Throughout the war, he drafted letters on behalf of soldiers who were not able to write themselves and sent them home to wives, mothers and fathers, and sons and daughters.

Below is the transcription of a letter Whitman wrote on behalf of Nelson Jabo, a soldier serving in the 96th New York infantry throughout the Civil War. 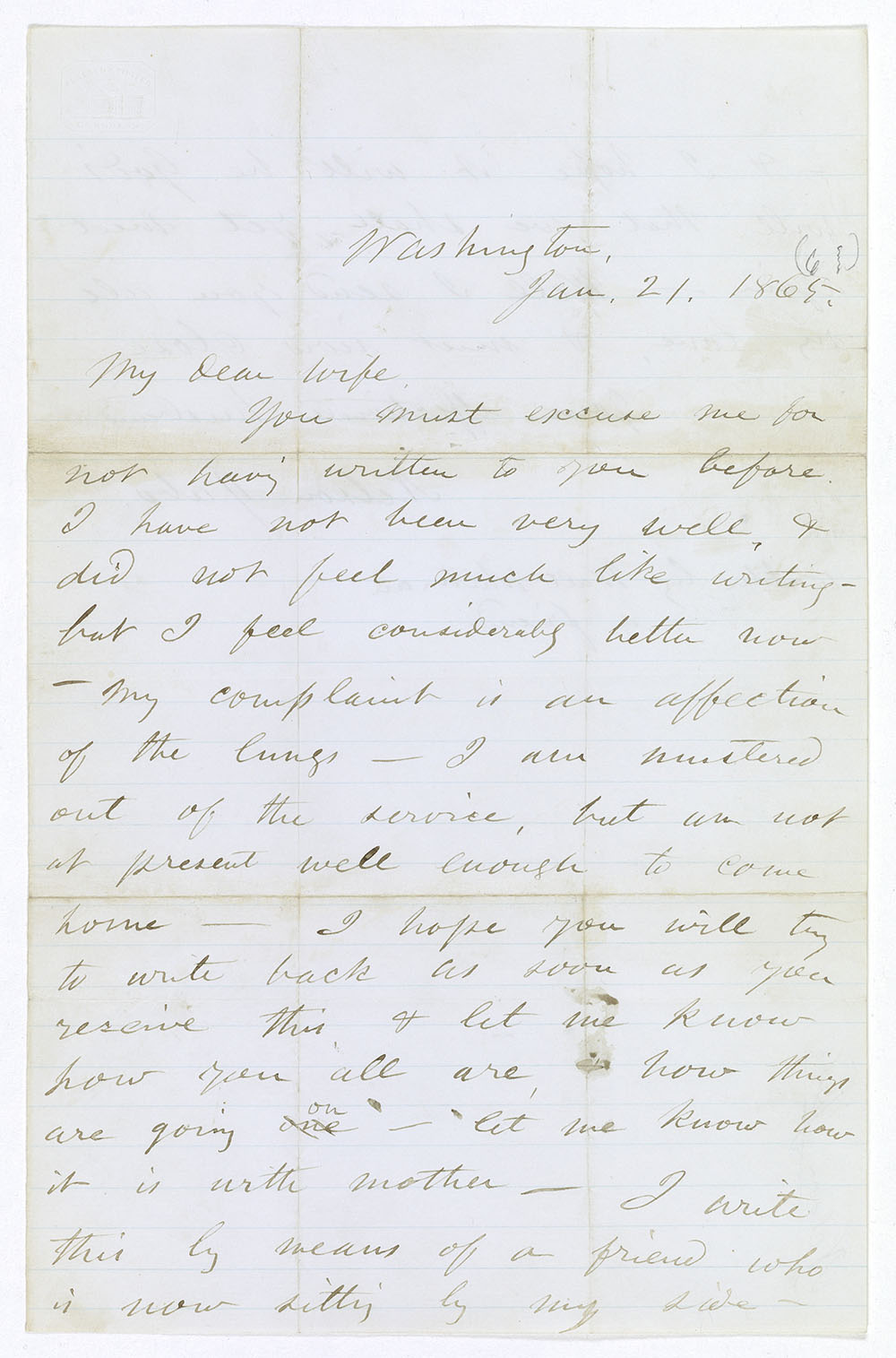 You must excuse me for not having written to you before. I have not been very well, & did not feel much like writing—but I feel considerably better now—my complaint is an affection of the lungs—I am mustered out of the service, but am not at present well enough to come home—I hope you will try to write back as soon as you receive this & let me know how you all are, how things are going one on—let me know how it is with mother—I write this by means of a friend who is now sitting by my side—& I hope it will be God’s will that we shall yet meet again—Well I send you all my love, & must now close.

The Tomb of Unknown Soldier

The Tomb of the Unknown Soldier was established in 1921 at Arlington Cemetery. The unknown soldiers laid to rest at the tomb signify all the missing and unknown who gave their lives and their identities to protect our nation. Throughout history, Presidents of the United States have traditionally laid a wreath at the tomb in honor of those who have served our nation.

The National Archives also holds a sketch from the original plans for the tomb over the vault at Arlington Cemetery. 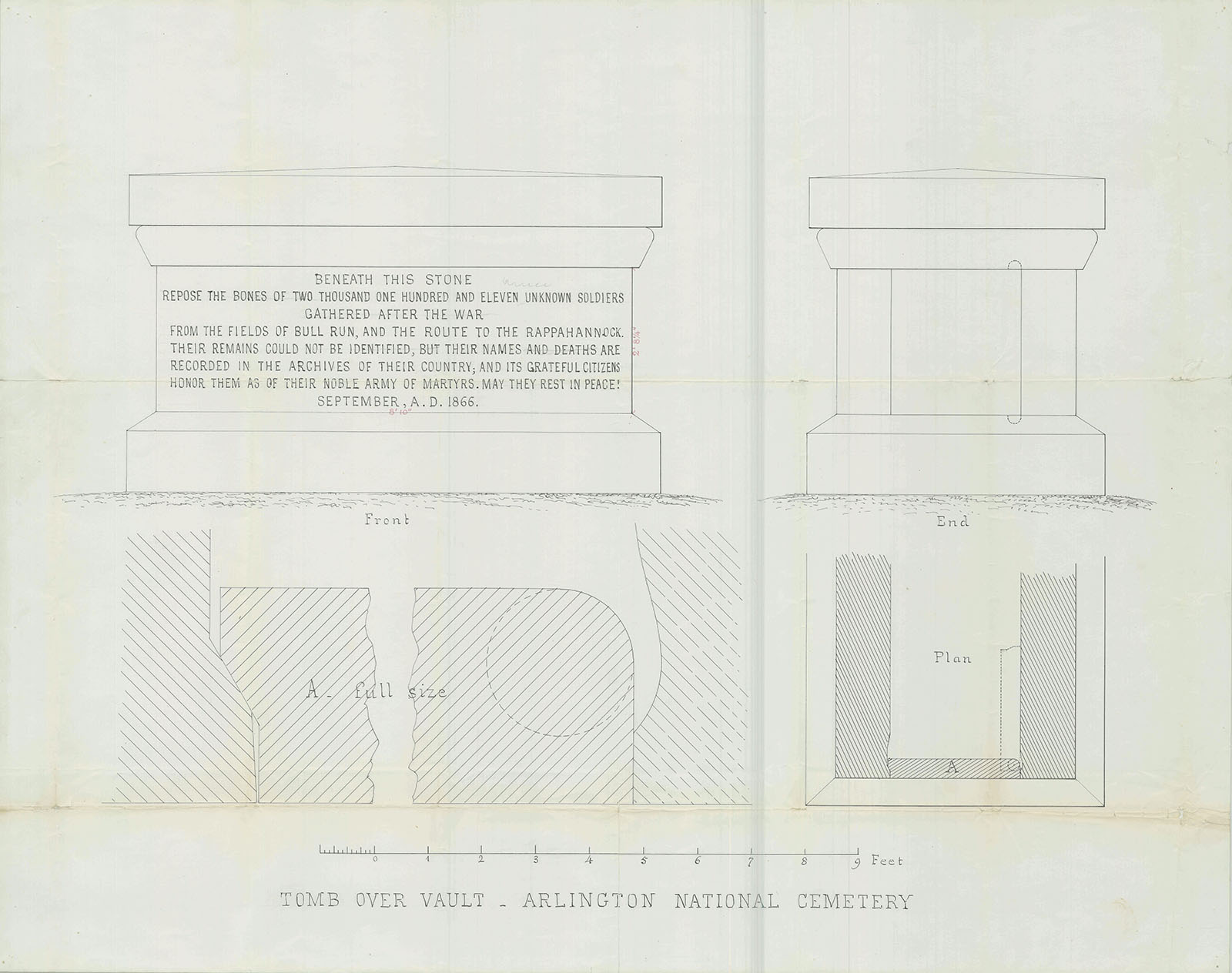 As we celebrate our school systems today, we remember our nation’s long and ongoing path toward justice and the individuals who paved the way for equal access to education. These individuals included the Little Rock Nine. Watch the 1964 Academy Award-winning short subject documentary produced by the United States Information Agency about the students who integrated Central High School in 1957. The film was restored by the National Archives Motion Picture Preservation Lab.

Hats Off to the Grads 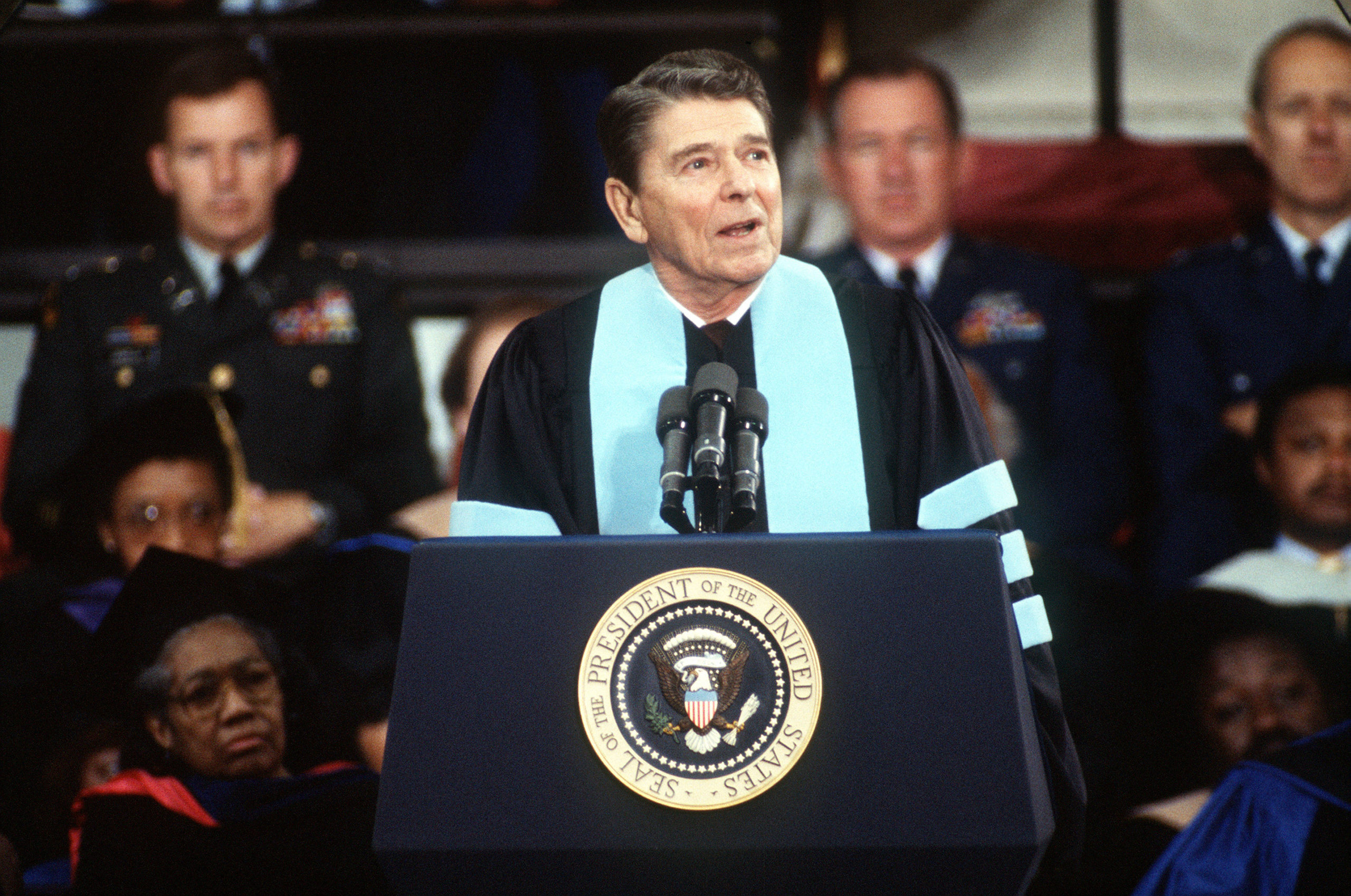 Commencement season includes serious knowledge dropped by academics, inventors, authors, artists, business people, and of course, political leaders. Some of these commencement speeches have eventually gone down in history.

In 1964, President Lyndon Johnson officially unveiled his “Great Society” in his commencement speech at the University of Michigan. “The challenge of the next half century is whether we have the wisdom to… advance the quality of our American civilization,” Johnson told the graduates. “For in your time we have the opportunity to move not only toward the rich society and the powerful society, but upward to the ‘Great Society.’”

President Ronald Reagan’s commencement speech at Notre Dame University in 1981 reflected his vision of America and evoked great pride and optimism for the United States.

And he made a prediction: “The West won’t contain communism, it will transcend communism. It won’t bother to dismiss or denounce it, it will dismiss it as some bizarre chapter in human history whose last pages are even now being written.” A decade later, the Soviet Union collapsed.

When Tennessee became the final state needed to ratify the 19th Amendment and grant American women the right to vote, it should come as no surprise that a wise, strong mother was at the helm of the monumental legislative decision. The vote in the House of Representatives was tied, and Harry T. Burn, a 24-year-old representative, provided the infamous “aye” that broke the tie and ratified the amendment. Burn had hoped the issue wouldn’t rest with him—he supported suffrage himself, but his constituents were opposed, and he faced an election that fall.

Why did he vote for ratification at the last second? His mother had sent him a letter asking him to be a good boy” and vote for suffrage. When explaining his vote, Burn said, “I know that a mother’s advice is always safest for her boy to follow, and my mother wanted me to vote for ratification.”

After the infamous Tennessee vote, Governor Albert H. Roberts sent notice of the ratification to Washington, D.C., and on August 26, 1920, Secretary of State Bainbridge Colby certified the ratification of the 19th Amendment effective August 18, 1920. Learn more about the road to ratifying the 19th Amendment and the women’s suffrage movement with our Rightfully Hers online resources.

From her Supreme Court writing to the videos of her pumping iron, Justice Ruth Bader Ginsburg has become a cultural icon. Did you know that RBG is a longtime fan of the National Archives? Just 16 days after she was sworn in to the Supreme Court in 1993, she came to the Archives to see the original 19th Amendment. In 2018, she visited the Archives Rotunda to swear in new citizens in front of the Constitution and for the D.C. movie premiere of “On the Basis of Sex.” So grab your popcorn and get ready to learn about the life of RBG!

Believe it or not, we didn’t invent the concept of four-legged coworkers during the time of social distancing. In fact, sailors aboard the U.S. Coast Guard Cutter CAMPBELL commissioned Sinbad the sailor dog as their on board mascot during World War II. His morale-boosting smile, bravery and fighting paws earned him several awards for his service.

His 11 years at sea were immortalized in film!

But his late nights gallivanting with the guys and ladies at each port also landed him in the doghouse more than once! Apparently, after one particularly raucous night out with the boys, Sinbad failed to muster and stayed sacked in his specially made sea hammock.

A Space for Women

Throughout American history, women have fought for equal opportunities in STEM fields in general and space exploration in particular. The women of NASA are a group of many firsts––the first American woman in space, Sally Ride, the first African American in space, Mae Jemison, and first woman to manage a spacecraft launch for NASA, Marjorie Townsend.

These brave trailblazers made it possible for young girls today to dream of being anything they want to be when they grow up––even astronauts.

It’s no secret that the Watergate scandal had its share of eavesdroppers and bugfinders. A lesser-known piece of the puzzle, however, is that some of these bugs were found in the most unlikely places—even inside the tubes of ChapStick! The lip balm with hidden microphones were one of many bugs on display at the trial of the Watergate burglars.

Nothing says spring like a day at the ballpark. Though baseball is on hold this season, we can look to our past and explore how our nation’s favorite pastime has made history. Presidents throwing out first pitches or hosting World Series winners at the White House are familiar images from each baseball season.

The connection between Presidents and baseball stretches back as far as Abraham Lincoln. According to research conducted for the 1939 Major League Baseball Centennial Celebration, Lincoln was playing baseball in Springfield, Illinois, when he was informed that the Chicago Republican Convention had nominated him as the Presidential candidate. Lincoln is reported to have responded, “They will have to wait a few minutes until I get my next turn at bat.”

How are you communicating with friends and family during quarantine? While virtual happy hours and zoom conference calls might feel new, Americans have been redefining how we communicate for centuries.

April 3, 2020 marks the 160th anniversary of the first ride of the Pony Express, a mail service delivering messages, newspapers, and mail using relays of horse-mounted riders that operated between Missouri and California. With its young riders and horses delivering mail faster than ever before, it became a symbol of American individualism and the adventures of the American West.

In World War I, communication was extremely important. Unfortunately, technology—like the telephone or the telegraph—was not as reliable as the commanders of Europe would have liked.

In an attempt to improve combat communications, the leaders of World War I turned to a much older form of communication: the carrier pigeon. These pigeons were used by both the Allied and Central Powers to pass on important messages from the front lines.

To highlight women’s history, hear from former National Archives Foundation Vice President Cokie Roberts, Virginia Kase, CEO of the League of Women Voters, and more to find out what some of our nation’s female leaders think about the future of women’s rights in America in the third video in our Rightfully Hers series.

This video is part of our Rightfully Hers initiative. Click here to learn more about the project and who made it possible.