Charles Alston was a notable African American artist and teacher. During World War II, the Office of War Information commissioned him to create propaganda drawings in support of the War. Alston used his unique position to highlight Black leaders who made significant contributions to society. 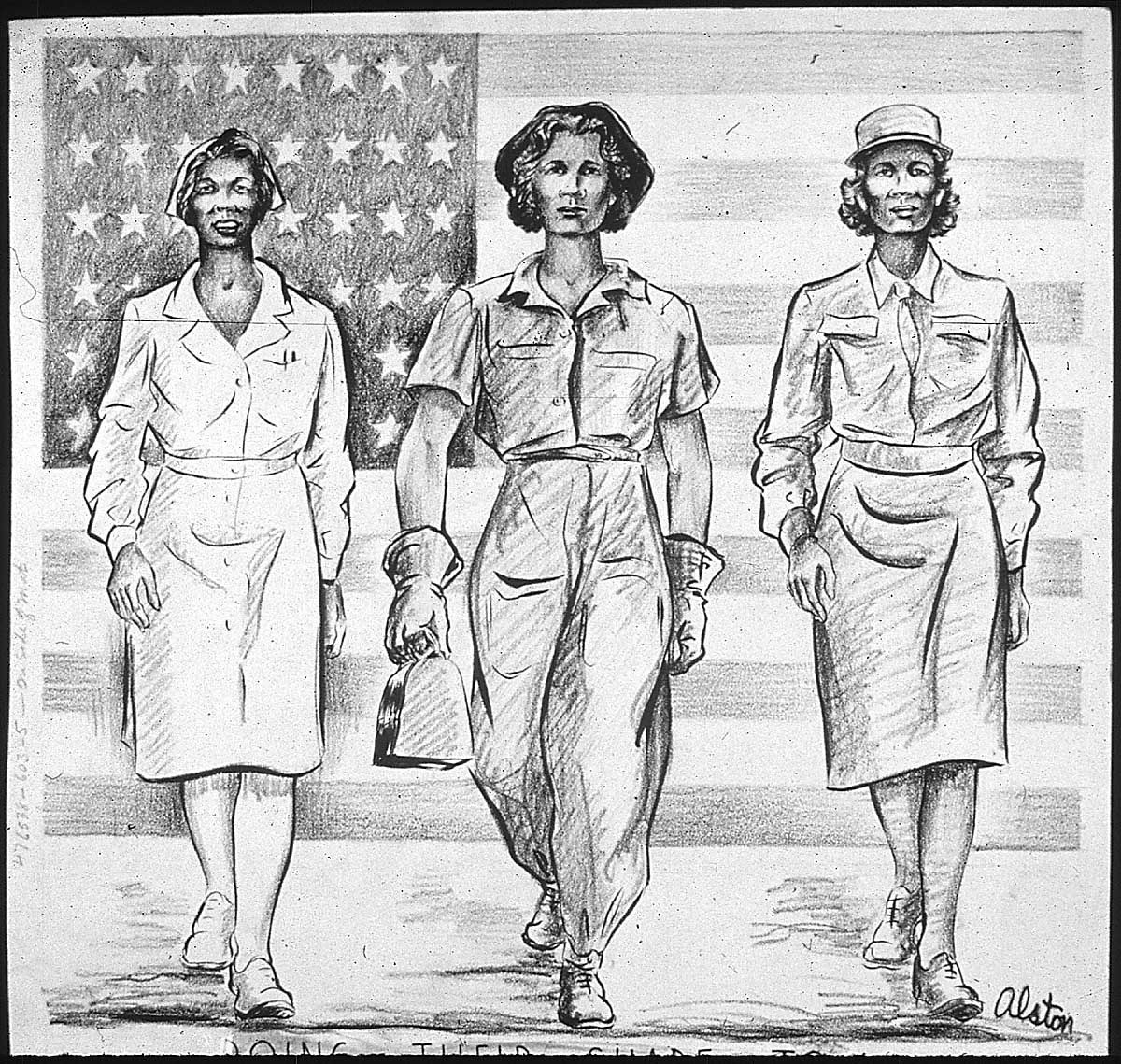 fans. But when he was drafted for the U.S. Army, some of his fans were distraught. These “Elvis Presley Lovers” wrote a strongly worded letter to President Eisenhower begging for Elvis to not end up with a G.I. haircut.

Dear President Eisenhower,
My girlfriend’s and I are writing all the way from Montana. We think it’s bad enough to send Elvis Presley  in the Army, but if you cut his side burns off we will just die! You don’t no how we feel about him. I really don’t see why you have to send him in the Army at all, but we beg you please please don’t give him a G.I. hair cut, oh please please
please don’t! If you do we will just about die!

Unfortunately, their letter writing was in vain. On March 24, 1958, Presley signed his acknowledgement of service obligation and entered the Army.

However, it turns out that President Eisenhower was just as much a fan of the King as they were. Check out his official membership card to the Elvis Presley Fan Club.

Are you interested in international travel and foreign cultures? Sixty four years ago to the day, President Dwight D. Eisenhower created the People-to-People program to enable 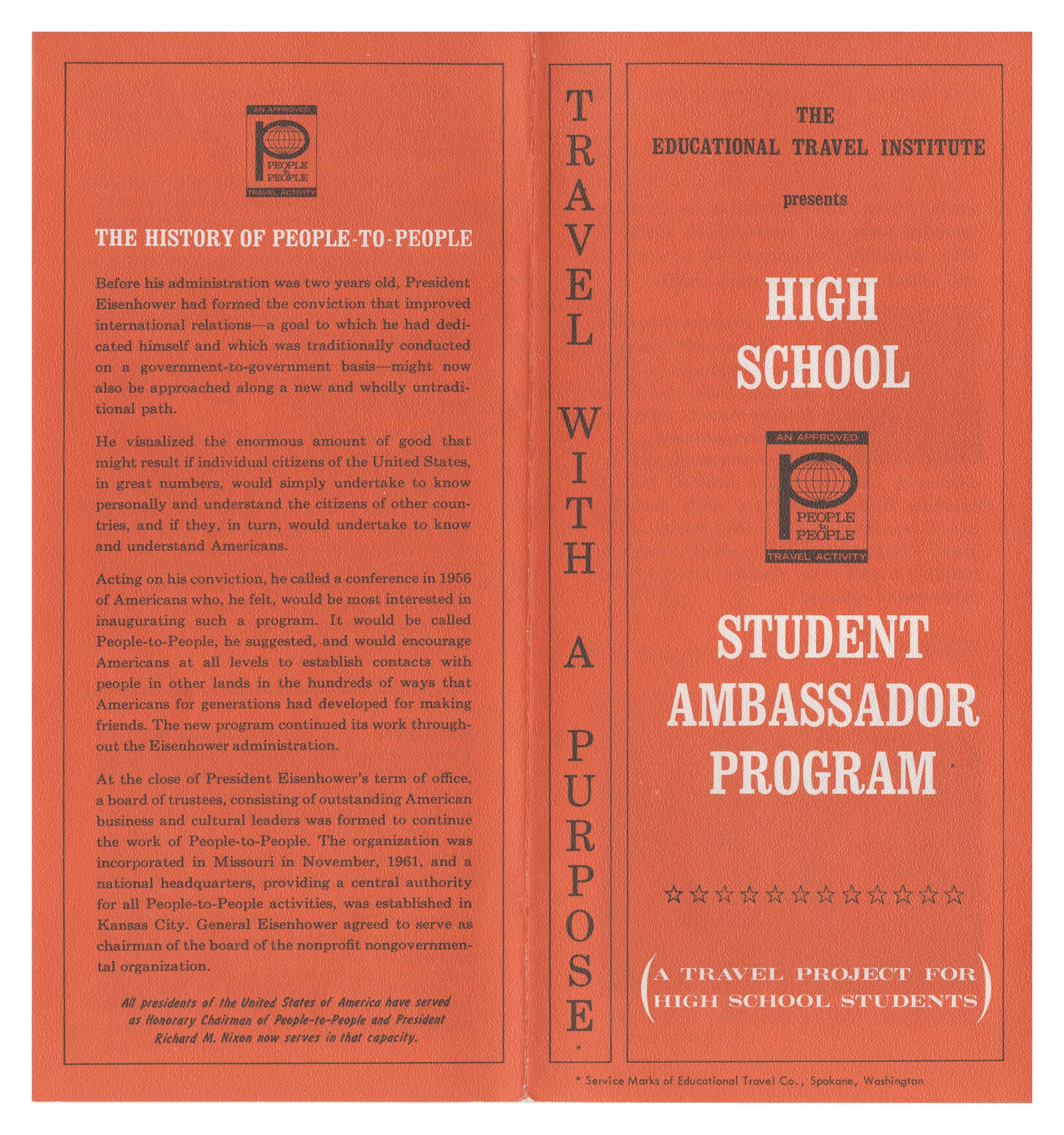 Americans to better understand and learn from people across the world. His goal was to improve America’s international relationships and create lasting peace. Check out this pamphlet for the program’s Student Ambassador Program from 1970 and see if you’d be right for the job!

The Hills Are Alive

“The Sound of Music” is one of the most popular musical films of all time, having won numerous awards and the hearts of people all around the world (“doe, a deer, a female deer…”) The film depicts the interesting lives of the von Trapps, an Austrian family of

singers who were forced out of their homeland by Nazis, and immigrated to the U.S. for a new life. But the movie doesn’t show exactly how it really went down. Check out the facts versus big screen fiction for yourself. Spoiler alert: there were actually 10 children, not 7!

National parks have become the home of all sorts of wildlife. But one kitty cat decided he’d rather live a more glamorous lifestyle after frequenting the Herbert Hoover Presidential Library (located on the grounds of the Hoover National Historic Site). “Herbie,” as he came to be known, convinced the staff there to adopt him as the Library cat and was much loved. He took it upon himself to conduct guard patrols.

President of the Parks

What is a good presidential summer job? One of President Gerald Ford’s summer jobs growing up was as a Park Ranger at Yellowstone National Park. According to a 1975 newspaper article, Ford had many adventures, including scaring a bear out of his cabin by giving it “a hefty kick in the backside.” In response, Ford remarked, “I don’t recall these heroics but they sound good 37 years later.” 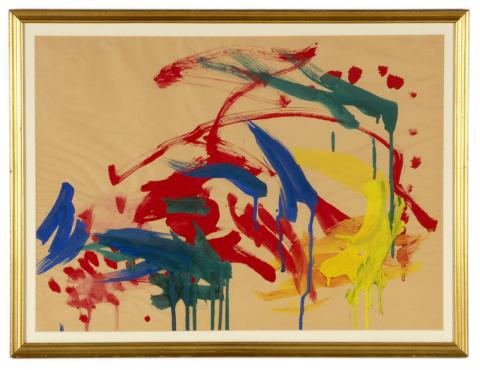 Many of us have had dad display our most precious artwork on the fridge, but how many of us can say that dad hung the art we made as youngsters in the White House?! Caroline Kennedy finger painted this masterpiece when she was a young girl, which is now preserved forever in the John F. Kennedy Presidential Library. Don’t forget to create your own work of art for dad this weekend––who knows where it may end up one day! 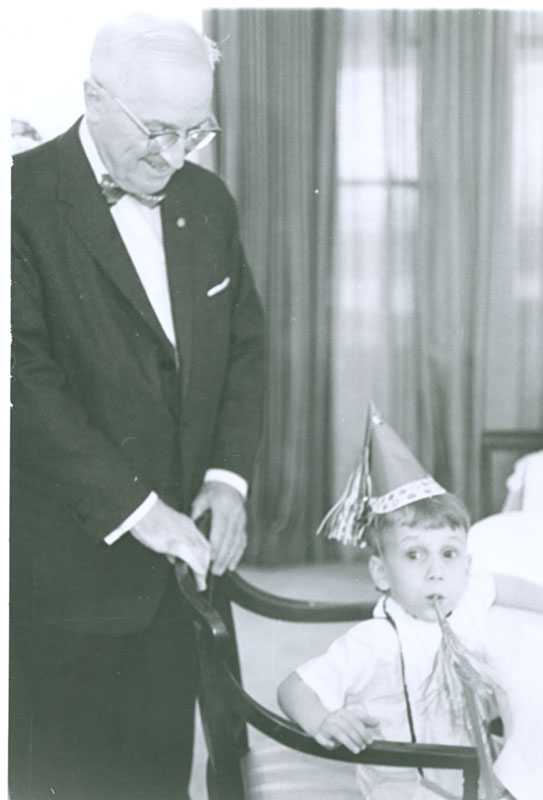 What would you do if you found out that your Grandpa was President of the United States? This major detail apparently went right over Clifton Truman Daniel’s head until he was six years old! A fellow classmate broke the news to young Clifton, asking, “Wasn’t your grandfather President of the United States?” To which he famously replied, “I don’t know.” Read more about the oldest grandson of President Harry S. Truman.

(Another) Bigfoot at the Archives 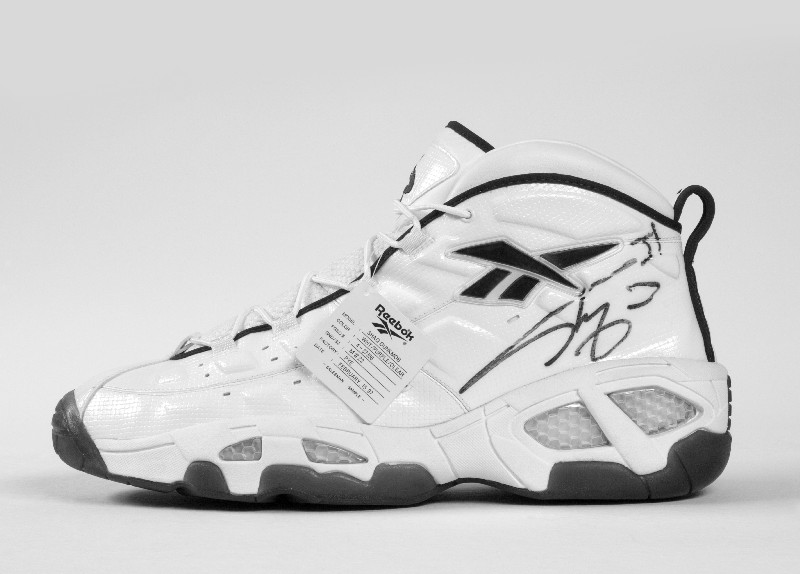 Speaking of familiar feet, we have an autographed shoe from basketball legend Shaquille O’Neal. Shaq’s size 22 Reebok was a gift to President George W. Bush from Los Angeles Mayor Richard Riordan. The mayor presented the gift to President Bush in 2001 during his first visit to California as President. At the time, the basketball star was playing for the Los Angeles Lakers.

From the “mom saved everything” file, the Franklin D. Roosevelt Presidential Library has President Roosevelt’s hair from when he was four years old. The blonde strands were tied with ribbon and saved in a box by the president’s mother, Sara Delano Roosevelt, in June 1886. 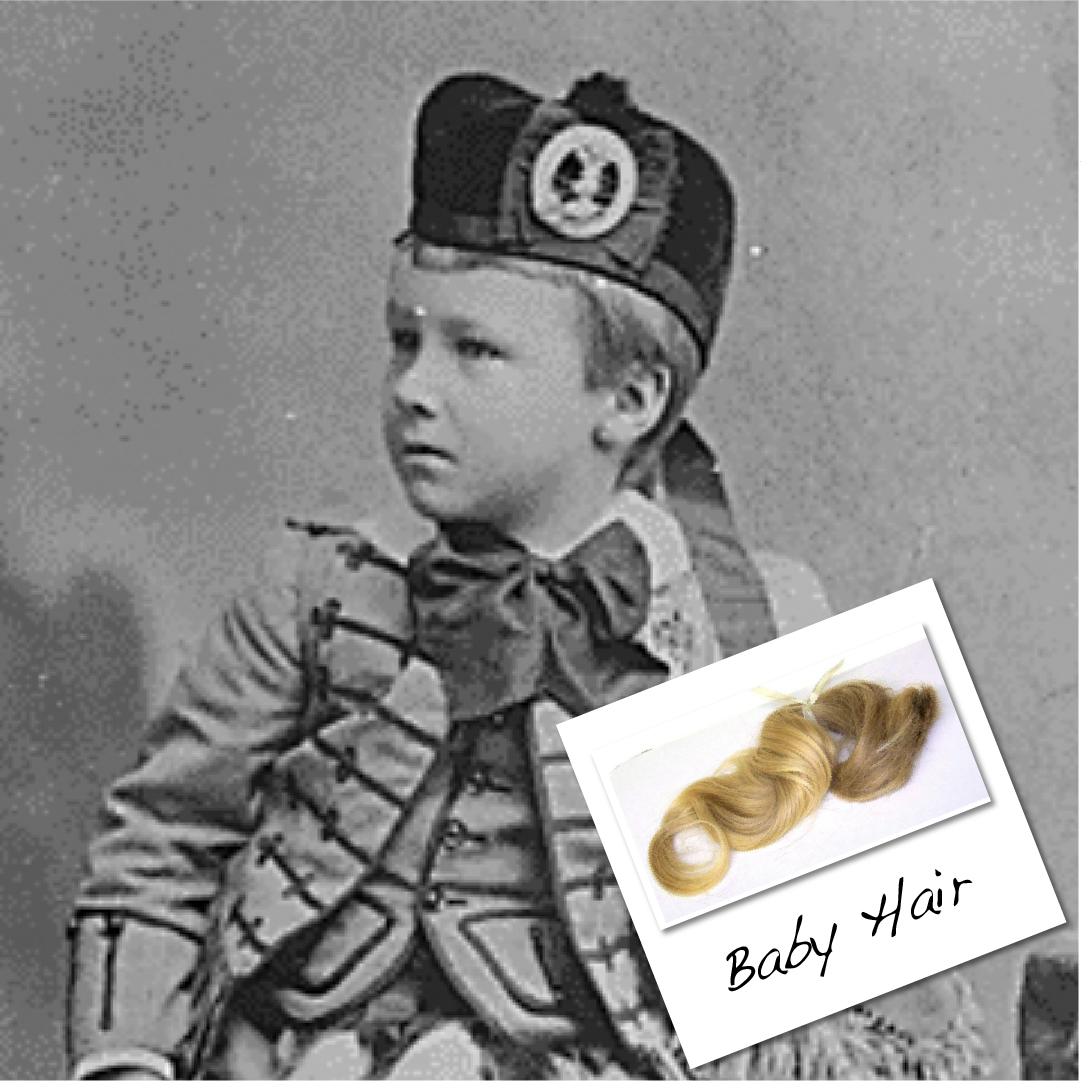 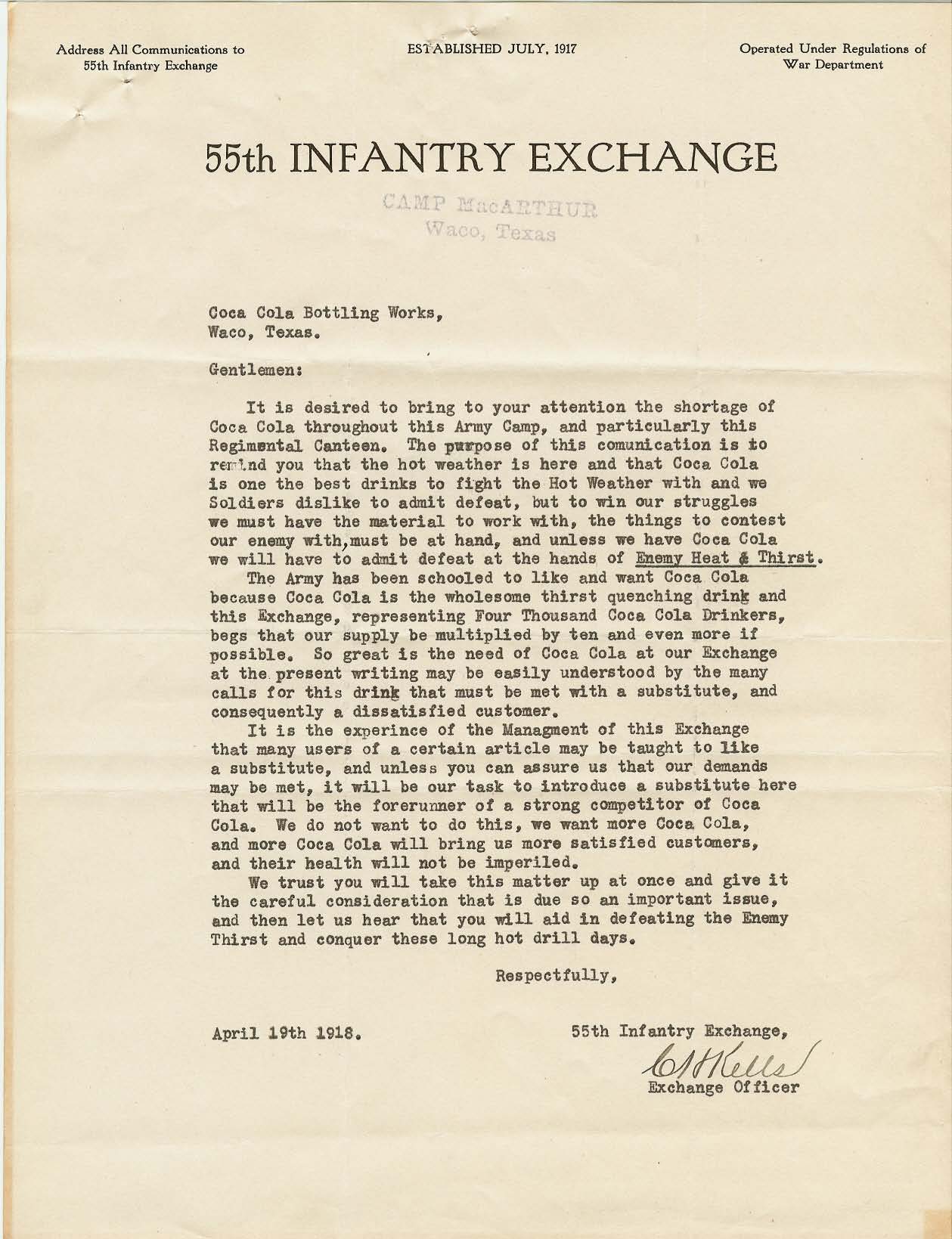 Coca-Cola for Our Soldiers

We all know there’s nothing better than a cold Coca-Cola on a hot day, and according to history, American soldiers agree. In 1918, the Exchange Officer for the 55th Infantry Exchange at Camp MacArthur in Texas sent a letter to the Coca-Cola bottling company asking for more Coca-Cola for the soldiers. The letter states that without this tasty beverage, soldiers will have to admit defeat at the hands of “Enemy Heat & Thirst.” Give the soldiers their cola!

Were all Presidents of the United States A+ students when they were young? The jury is still out,but thanks to National Archives documents, we know President Harry Truman was. First-grader Truman (shown on the bottom left) got the highest possible grades in spelling, reading, language and numbers.

When Miss Ewin was asked about her famous pupil in 1947, she said, “I never had to reprimand him a single time. He just smiled his way along. [He] was a very studious boy.”

Here is his fridge-worthy report card from second grade.

Pick up Your Pencil

Pencils have become a classroom staple, and what’s a pencil without a sharpener? Check out the U.S. automatic pencil sharpener patented by a Chicago inventor named Essington N. Gilfillan in 1905.

From a popcorn popper to an umbrella, you probably know by now that the National Archives has lots of patents. But did you know we have patents for living things too? That’s right––these inventors with green thumbs patented flowers! And it’s a good thing they did, because now we can give them to mom on her special day.

A Veggie a Day Keeps George Bush Away

First Lady Barbara Bush––one of only two first ladies to be both a mom and a wife to a U.S. President––had one very picky eater at her dinner table. President George H. W. Bush hated broccoli and once famously said, “I do not like broccoli. And I haven’t liked it since I was a little kid and my mother made me eat it. And I’m President of the United States, and I’m not going to eat any more broccoli!” After his major broccoli diss, broccoli growers sent Barbara three crates of the divisive green veggie. We know you may not like it, but for Mother’s Day, let’s all agree to eat our greens just this once!

P.S. –– Abigail Adams was the only other First Lady to be the mother and wife of a U.S. President! Have you checked out our special story time with Abigail herself? Watch now! 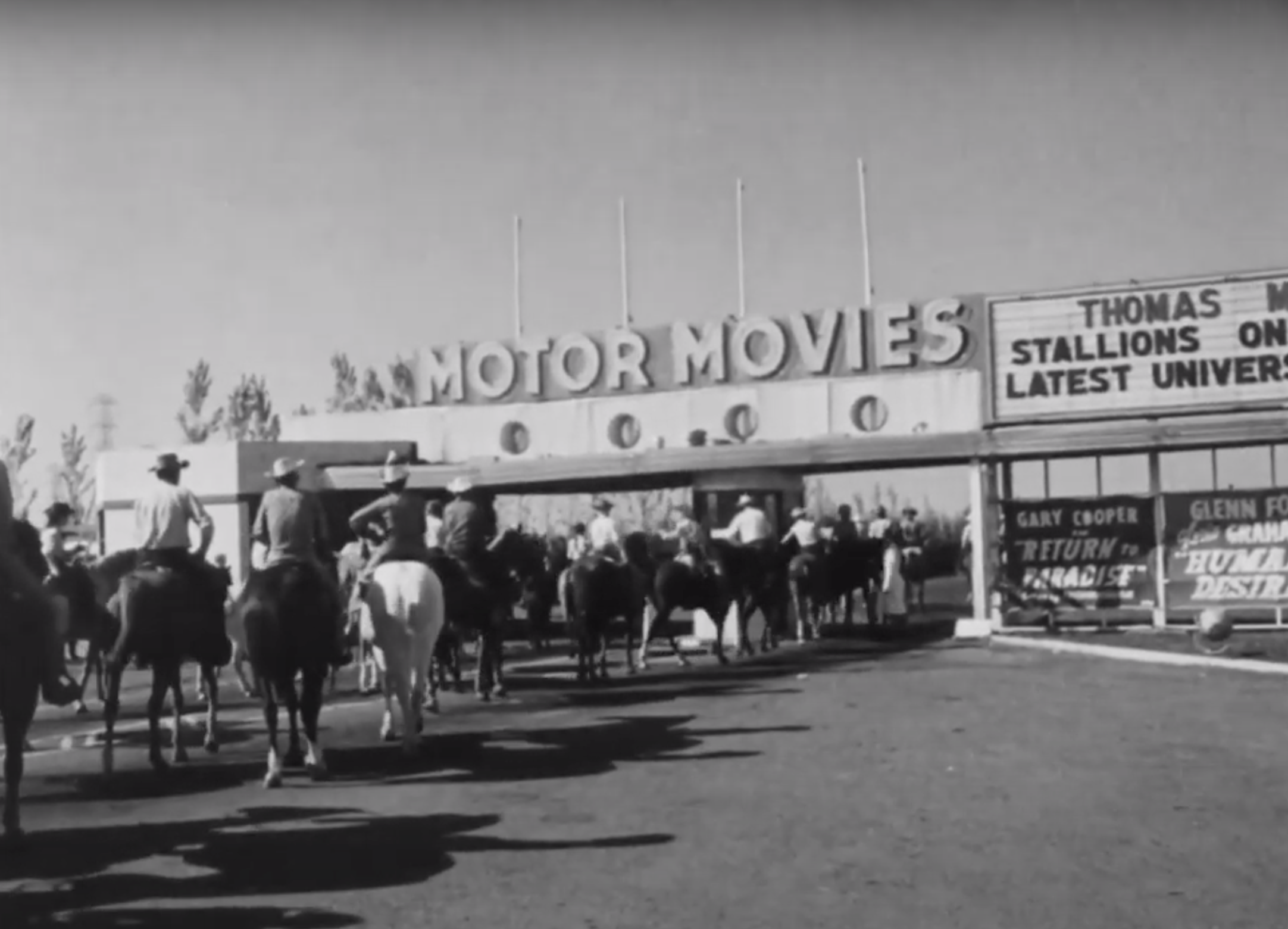 Galloping to the Cinema

Drive-in movies have been an American pastime since the early 1900s. But in this 1954 newsreel clip from the Archives, one California drive-in swapped out horses for cars and barrels of hay for popcorn. “Horse Night at the Drive-in” allowed movie-goers to ride in on their horses and watch the feature film from their saddles instead of their cars. See the newsreel clip.

Fan of Frozen, Toy Story and the Lion King? These box office classics wouldn’t have been possible without the invention of animated cartoons. We have one man to thank for Olaf, Mowana and Nemo: Max Fleisher. In 1936, he patented the art of the animated cartoon and paved the way for our favorite characters to steal our hearts.

Did someone say panda-monium? The pandas at the National Zoo in Washington, D.C., have become celebrities over the years, and we have President Richard Nixon and First Lady Pat Nixon to thank for bringing these chubby goodwill ambassadors to Washington. The first pandas, Ling-Ling and Hsing-Hsing, made their famous trek from China in 1972 after President Nixon’s friendly visit to China.

First Lady Pat Nixon welcomed the pandas to the National Zoo on April 16, 1972. After seeing a dynamic duo panda pair in Beijing, she was delighted to officially accept the nation’s own pair. Listen to her speech here!

What do astronauts eat en route to the moon? Hint—while it’s the “ice cream of the future,” it looks quite a bit different from the Dippin’ Dots we all know and love. Ice cream aboard Apollo 11 spacecraft was served either as a dehydrated powder to mix with water or a ready-to-eat compressed cube…not exactly an ice cream sundae. Other astronaut-approved food aboard the Apollo 11 spacecraft included dehydrated beef with vegetables, potato salad, cheese sandwiches, strawberry cubes and chewing gum—all that sounds messy in zero gravity! To combat flying crumbs in space, crumbly meals like grilled cheese sandwiches were coated in gelatin. Bon appetit!

If you now have a case of the moon munchies, and want to a taste of space, the National Archives Store can help! Try your own Space Neapolitan Ice Cream today. Shop our full space collection and get the astronaut the gear they need to explore the universe. We even have games and puzzles, all ready to ship so you don’t have to wait weeks for your items to arrive!

You’ve heard of soccer, football and baseball, but what about doggy wakeboarding, frog jumping and finger wrestling? The 1970s saw some strange sporting endeavors: barrel jumping on ice, parasailing, samurai fighting, archery, and walking on hands to name a few more. Surf’s up, dogs!

If April showers have you down, check out this interesting patent drawing for a combined umbrella and a cane from the Archives holdings. And don’t fret, May flowers are coming soon.

From the scottie dog and top hat to the thimble and boot, you know these tokens from the board game Monopoly. But did you know it was Lizzie J. Magie who patented this design of the classic board game way back on January 5, 1904?

Need your fix of games while at home? The National Archives Store has you covered with fun takes on the original Monopoly game. Whether it’s Washington-opoly, Army-opoly, or another kind of game, we can spice up family game night.