Over the years, the Archives has hosted countless public programs including conversations with U.S. Supreme Court justices, authors, ambassadors and much more. We’ll pick some of our favorites and serve them up for viewing at home – you know, in case you get tired of Friends reruns.

As part of the National Archives Remembering Vietnam exhibition and national initiative, we interviewed U.S. Vietnam War veterans about their experiences during and after the war. Hear their firsthand accounts and discover the online exhibition.

After the monumental March on Washington in 1963, the United States Information Agency produced a video called the Hollywood Roundtable, during which the likes of Harry Belafonte, Marlon Brando, James Baldwin and many other celebrities came together to discuss the march and the justice that Americans were fighting for.

Sports: A Vibrant Part of the American Story

John, Paul, George and Ringo rocked the nation and the world in the 1960s, impacting America’s youth and counterculture and popularizing British culture in the United States. Check out this clip from the Beatles’ roaring welcome at John F. Kennedy Airport in 1964.

From the Deck of USS Missouri

This video clip from the National Archives holdings shows the signing of the Japanese surrender documents aboard the battleship Missouri in the Bay of Tokyo on September 2, 1945.

The World War II featured document displays are made possible in part by the National Archives Foundation through the generous support of the Ford Motor Company Fund.

In this July 1952 video, Major General John A. Samford makes a statement on flying saucers, telling the American people that most UFO sightings can be explained. However, he does acknowledge a small percentage of sightings that cannot be explained. You decide how to read between the interstellar lines!

While the National Park Service wasn’t born until August 25, 1916, with the Organic Act, pioneers recognized the need to protect certain sites from public interference as early as the 1800s. President Theodore Roosevelt was among the most outspoken advocates, doubling the number of national parks while in office. Join us next week and bring the kids as we sit down with President Roosevelt on Thursday, July 16 at 1:00 p.m. to hear about his legacy firsthand. 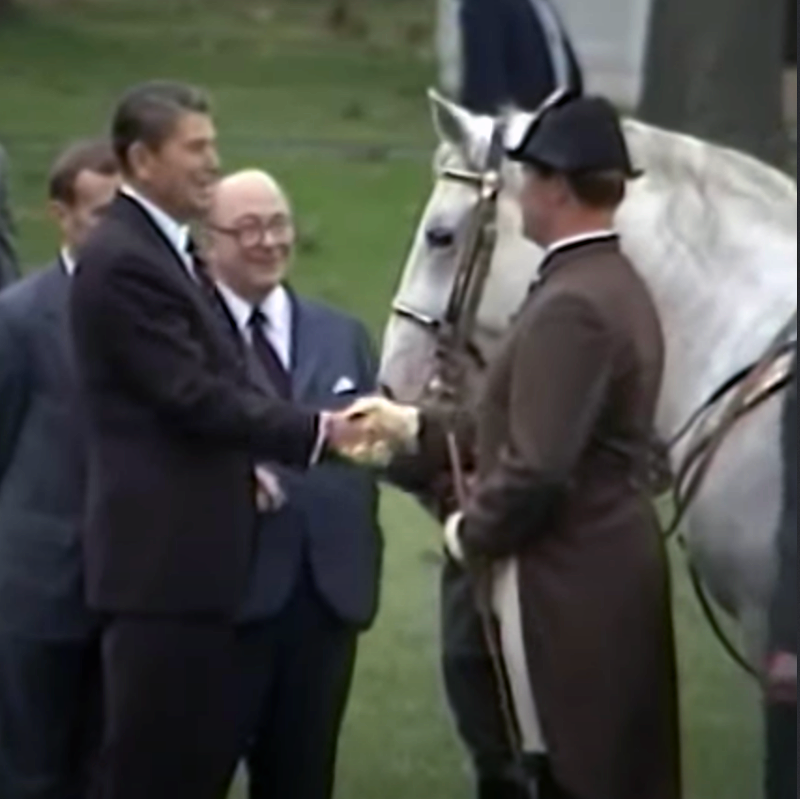 On November 19, 1982, President Ronald Reagan watched a performance from the famous Lipizzaner stallions of the Spanish Riding School of Vienna on the White House lawn. The president accepted one of the horses as a gift of friendship from the Austrian Chamber of Commerce. But don’t get your hopes up.

While almost all foreign gifts received by the president are sent to the National Archives and are not kept personally by the president, we don’t have any living gifts in our holdings! We do have live footage of the ceremony below and President Reagan’s diary entry from that day.

Raising the Flag on Iwo Jima

Many are familiar with the flag raising after the Battle of Iwo Jima in World War II. But did you know there were two flag raisings that day? Lean more with the next SLICE video in our series.

Have You Thanked a Teacher Today?

On this year’s Teacher Appreciation Week, we hope you’re giving the teachers in your life a little extra love for all they do! In case you need some ideas, President Herbert Hoover wrote a letter to Miss Gray, a teacher who inspired his love for reading from the time he was 15 through his years in the White House. He wrote, “Thank you for guiding me to the rich world of wonder, beauty, wisdom, and imagination that can be found in books.”

Grab a slice of American history with the next video in our SLICE series. This week’s video features social change that American women have fought for to allow them to pursue careers and raise children.

“The Great American Train Robbery” was America’s first-ever action film. Learn how this epic 1903 film transformed filmmaking techniques with the next SLICE video in our special series.

Earth Day and the EPA

Tune in to learn about the history of the Environmental Protection Agency and its work with DOCUMERICA.

A Privilege Flying with You

No one has told the Apollo 13 story ––and so many other American stories––quite like Tom Hanks. That’s why we honored him with the Foundation’s 2017 Records of Achievement Award. Check out the tribute film from the award ceremony to learn how Archives records played a role in the Apollo 13 movie.

You can also view the 2017 Records of Achievement Award ceremony and hear from Tom Hanks himself on the Archives records used to make the iconic Apollo 13 movie.

And, take a look at the mission’s technical air to ground transcription that shaped the iconic movie quotes.

“Houston, I believe we’ve had a problem here.”

Thanks to the Archives staff in the motion picture preservation lab, we get to see the world through a St. Bernard named, Patches. In this 70s education film, the students at Jackson Junior High are learning about alcohol education and have some groovy tips on how to avoid a hangover. Those who went a little too crazy on your last zoom happy hour, we’re talking to you!